He woke up with a renewed vigor that morning. After all, that was the last morning of 2009. The New Year virus had infected him as well. Initially, he was cynical about all this hoopla until the previous night. A phone call changed it all. His best friend had somehow convinced him to turn up at an upscale and supposedly “the most happening place to be at on New Year’s Eve”. “But you despised parties” claimed a voice inside him. He gazed at his mirror reflection. “Let me test the waters and take a dip just this once! After all I am just 25”. “You are gonna regret this man”. “What will I wear? A Stubble or a neat look? Stubble should go well with my look". He perceived an unusual spring in his steps that day. Change is always refreshing and there’s no harm in giving it a chance just one last time. Hours ticked away and it was twilight. “You look dashing!” he smiled at himself. “This night shall rein in a new change”.

He could sense the revelry in the twilight wind. The sky had a purplish enigmatic tinge. The silhouette of eucalyptus against the purplish sky waved at him. The evening was unusually chilly. It was a blue moon night. "A blue moon is a full moon that is not timed to the regular monthly pattern" said the news paper. That big off-white sphere up above gazed at him. He saw a "Mona Lisa " smile on its patchy texture. Alone in the infinity, serene and radiating with full fervor. All he wanted to do was stand there and look at the magical sky. It aroused tender emotions in him. He felt connected, connected with the higher forces that govern the universe. Enchanting! Tears rimmed up his eyes. Noisy music interrupted him. “Ahh! Yes it’s the party tonight and I am invited, better get going”.

It was exceptionally dark in the club. Candles in exotic colorful stands lent the place a hippie ambiance. All he could see were silhouettes swaying to trance music. As his eyes adapted to the darkness, he saw his friend seated on a couch with others. He went up there. There were introductions and conversations started. Exotic cuisines were supplemented with all kinds of drinks.Name it and it was there. Hours passed by.He felt out of place, something was amiss. “Your Attention Deficit Disorder is playing with your nerves, get a life!” He walked up to an isolated and exceptionally dark corner. He saw a couple making out there. They were so into each other that they didn’t care for his presence. He moved away so as to give them “space”. Sigh…”How I wish my girl was with me tonight, we would have had welcomed the 2010 morning together”. He felt an irresistible urge to smoke. He moved out of the premises for a quick smoke.

A group of guys were arguing with bouncers so as to let them in. He saw two girls kissing each other. “No Big Deal!” he thought to himself. Minutes later, he felt his worked up nerves alleviate. “Perhaps, I am a misfit in this puzzle” he told himself. He sat on the pavement. The parking space was fully occupied yet drivers of luxury sedans were honking mindlessly as if that would create a new space for their vehicle out of nowhere. A group of laborers were laughing heartily as they walked past him. Gorgeous ladies dressed in short dresses and long heels were walking into the club. “It’s a December night, don’t they feel cold or what!” He glanced at his Rolex Chronograph and it read 11:25.

“I don’t want to go inside and neither do I want to be stranded on a lone footpath”. On an impulse, he stood up and started walking. The owner of a burger kiosk was winding up for the day. Two men were warming hands on a bonfire of fallen leaves. He saw a tea stall ahead. The cardamom aroma roused him and he sat himself on the sole wooden plank. The radio was playing Shammi Kapoor’s “Yeh Chand sa roshan chehra, zulfon ka rang sunhera …” Two men were playing a game of chess and talking animatedly. “Some Game” he muttered to himself. A young 7-8 year old boy brought his cup. He took in the cardamom aroma and cupped his hands around the warm glass. Hooting sounds could be heard in the distance. He presumed that the countdown had begun. “10, 9, 8, 7….3, 2, 1” “Nayya saal badhai ho bauji” exclaimed the chai vaala. He greeted the chess players as well. He paid a generous tip to the young boy and walked back to the parking lot. The moon was radiating in the black blue sky. He sat on his car’s bonnet and gazed at the 'blue moon'. 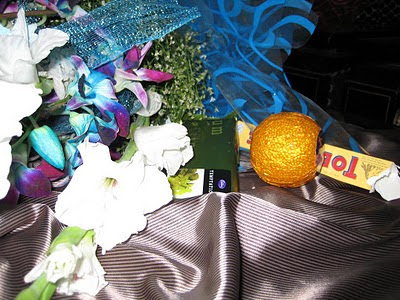 A collage of my birthday presents :)

I have a confession to make. I didn't really expect anyone to read my last post. I just wrote it for the sake of it. Moreover, i feel that writing in a way unburdens my soul. Alas, a friend and a guest read it. And i am somewhat embarrassed.Fingers crossed this time!

GOD! Last night was worse than the previous one! I am still shaken to the core. Strange and weird i must say.

I was not feeling good. I had this uneasy and breathlessness feeling. Was it due to excessive carbohydrates in dinner? Or perhaps a psychological issue? Moreover,i caught up with "A Haunting" on Discovery before hitting the sack. Signed in to Gtalk to clarify an issue and went to bed. In the middle of night i regained my consciousness from beta state. I was shivering intensely in my blanket. I was perplexed. Why was this happening? I don't feel that cold usually.The intensity increased as i became more aware of it. My body started aching due to tremors. My mind was like "You are gonna die".

I instructed my mind to tame those tremors. I started counting 10. Scary thoughts like " You are possessed "
"You have H1N1" , "You have lost your sanity " plagued my mind. I tried my best to concentrate on counts.
After an hour's struggle, my body relaxed. All this while I was consoling myself "Everything will be alright".
I drifted into beta state only to be woken up with a new sensation. I was sweating and was exceptionally warm."You are ill megha, mentally and physically".

Woke up at six in the morning. Tex-ted a good luck message to my friends and snuggled up in my cozy blanket again. To my surprise, i was feeling quite normal. There were no traces of previous night's illness.

So here i am trying to join the dots. Was it an over dose of carbohydrates or "A Haunting ". 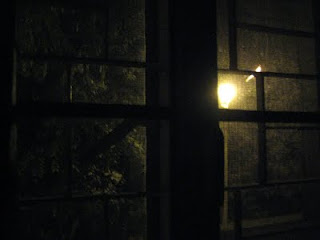 My amateur attempt at capturing the essence of night

Last night too I had this recurring dream of falling teeth accompanied by bleeding gums and intense pain. Ghastly isn’t it! I woke up with a gloomy sentiment today. I remember reading somewhere that dreams communicate and we have to decipher their meaning. May be I need to visit a dentist or is it something deeper? I Googled ‘recurring dream of falling teeth’ and the results confirmed my intuition.There are several interpretations to it. I choose one that holds good for me.

I am nursing a bruised self esteem. Why am I not strong enough to defend her and allow a third party to batter her? Poor baby, every now and then she’s beaten black-and-blue. It’s following a recursive pattern for long. Someone says things and that very night I have this terrible dream. Sigh…I wonder if I am the only one around who’s getting these ghastly visions. I have seen discussions in forums but to this date I have never ever come across a person with a similar problem in real life. 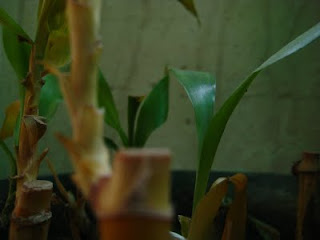 She’ll be hale and hearty in a day or two but this is not the long term solution. For how long will this persist? I had a discussion with an acquaintance and he said that I am over-analyzing things. We introverts tend to think too much about what we say or hear. He’s right but dreams never lie. Merely trimming down the weeds is not a solution. They should be pulled out along with their roots. I need to nurture her in a different manner. She should be strong and resilient. And how is that to be done?

At times she tells me to run away and start afresh at a distant place. I have had a tough time in clarifying to her that this is not the way out. But she’s a stubborn baby. So, I simply stop paying heed to her tantrums. And when she sees that Mamma is upset, she gives up and complies with Mamma.

However, I am concerned about her future. Why should I allow a third party to fool her or should I say “Ch#### bana jaaye” to be more precise. I don’t want this to happen again every now and then. This is something I need to work on. I plea to the higher forces to guide me in this operation. 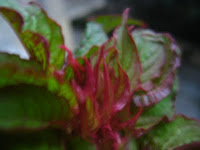 Flourish like this plant in the garden of intellect